Concrete’s development - a journey through time, space and aesthetics

Loved, scorned and forgotten for centuries. Concrete has been through a lot, but today it has rediscovered itself as an aesthetically powerful and functional instrument.

Concrete and modernity has often been seen as two closely connected characters, both good and evil.

The material is an incarnate part of our modern industrial development. Right from the problematic associations that the totalitarian dictators and 1960s social housing brought to it, to the new and exciting architectural potential the material continues to allow.

Concrete’s history stretches further back than we would expect. 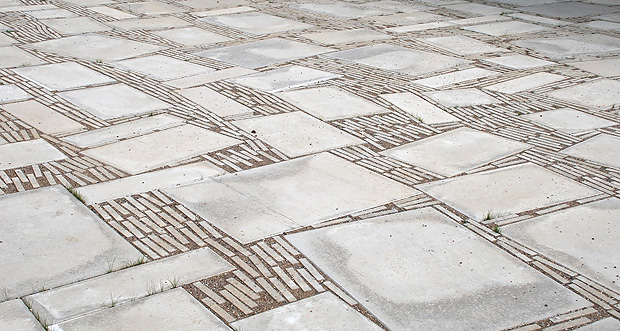 An old product in a new form

Already in ancient Greece there was a concrete-like material used to build houses, bridges and aqueducts and the great pyramid of Giza was also built with some form of artificial sandstone, similar to today's concrete.

However, the material was overlooked for centuries until in 1756 the British engineer John Smeaton revolutionized the construction industry with his use of hydraulic mortar in concrete. And if we jump 200 years into the future to the 1920s and 30s, then modernist architects like Le Corbusier and Ludwig Mies van Der Rohe almost perceived concrete as a utopian material, symbolic of humanity's progress and potential.

Concrete’s aesthetic value did have a rough time in the following decades. Partly as a result of the fascist and Stalinist use of bombastic concrete monumentality, but also largely due to the alienating housing projects of the 1960/70s.

Development and practical use

The gradual development and improvement of the types of concrete that we have experienced to date have proven that the material has a practical, functional and aesthetic justification in our society.

Approximately 7.5 billion cubic meters of concrete are produced each year worldwide. As the figure reflects, concrete has become an incarnate part of almost all new buildings. Today, it is included in everything from load-bearing structures to patios, driveways and roof tiles.

However, where concrete’s practical and functional value has long been accepted, it is only within the last 10-20 years that the material has had a proper aesthetic renaissance.

In recent decades, concrete has, both as an aesthetic and functional material, again won a place in the hearts of designers, architects and among the general public.
The many innovations in concrete products have meant that concrete is no longer considered to have only one expression. Surface structure, color, shape, durability, etc., can now be varied and adapted to the individual design.

In this way, concrete can be used as a strong aesthetic and form-related instrument.

In a Danish context, we have witnessed this through innovative building projects such as the American architect Steven Holl's Heart Herning Museum of Contemporary Art (2009) and Frenchman Jean Nouvel's DR Concert Hall (2009). In both buildings the concrete’s dynamic and tactile expression creates both a unique and progressive design.

However, concrete is no longer exclusively used in building design, but has gradually been adopted in other, more unconventional design genres. Particularly in furniture design and artwork, where we have for instance experienced a real boom of products made ​​of concrete.

Inspired by 1930s industrial design, you can now acquire everything from couches, chairs and table tops to lamps and candlesticks in concrete.

The material’s renaissance shows us that despite its long history, it is still topical and contemporary. 1960s concrete ghettos have been put in the rearview mirror and a new era of aesthetic diversity and form-related innovation has begun!