In 2009, the Herning Museum of Contemporary Art, HEART, was inaugurated and the result speaks for itself. The unique architecture is quite simply a study in how, with creative ingenuity, you can create amazing results with stone and concrete. 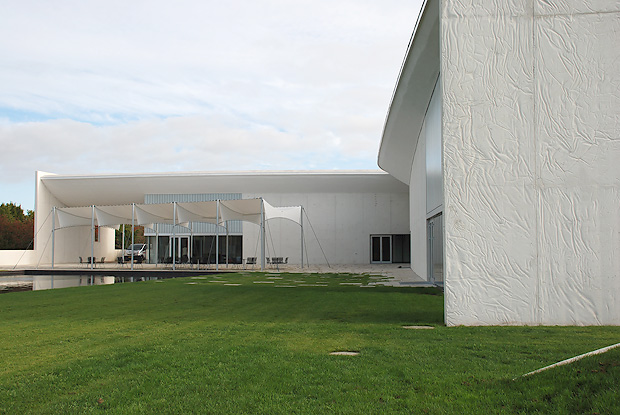 When the Herning Museum of Contemporary Art chose to call itself HEART, it was no coincidence. In addition to the contraction of 'Herning' and the word 'art', it also symbolizes the pulse and heart - two elements that if anything describe the Mid-Jutland building.

All 5600 m2 is designed by the American architect Steven Holl, who has been faithful to the local context where the museum finds itself. From the first moment he has been inspired by Herning's textile history with factories and an armory. An inspiration that has resulted in a museum primarily finished in a textural theme.

In order to honor the special historical context, the walls are colored in white concrete and the facades have been given a unique, wrinkled fabric surface. A result that could only be achieved by casting concrete in situ – on site.

This method makes it possible to construct buildings with uneven surfaces and unusual angles, because the flowing concrete is easier for the molder to work with. An equally important advantage of the method is that in situ casting allows for large spans and girder-free solutions, which makes it possible to create 'lightweight' concrete structures.

Resembles shirtsleeves from above

It has, among other things, been necessary, since the textural reference should be carried through to the roof. The form here consists namely of five large shells, which, seen from above, resemble a series of shirtsleeves cut lengthwise.

A comprehensive detail that can be attributed to an architectural brush stroke, which allows the overall theme to saturate the building from every conceivable angle.

It can be done with less and a more down-to-earth artistic expression will also become apparent if you focus on the unique paving around the art museum.

Much of the outdoor area is created as an extension of the building and consists of, among other things, paving stones from IBF. In a very unconventional, but aesthetically pleasing way, they have managed here to combine the large squares and border tiles with small concrete bricks in a creative pattern.

A distinctive and beautiful solution that helps to create a harmonic interaction with the surrounding nature, and which also emphasizes that HEART is not necessarily your mandatory exhibit inferior.

The museum is simply a work of art in itself.